China’s Anti-Monopoly Law (AML) was enacted in August 2008. With the world still mired in the pandemic and downward pressure on global economic growth in 2021, there have been unprecedented developments in the merger review regime in China under the AML through legislative proposals and enforcement practices from the enforcement authority. Many have even dubbed 2021 ‘the year of antitrust’. We lay out in this article major breakthroughs in the merger review regime in China in 2021 and provide our insights, which we hope will help you develop a better grasp of merger review in China for the years to come.

Referenced in this article

The creation of a separate merger control bureau within the National Antimonopoly Administration clearly signals that merger control will continue to be a key antitrust enforcement area in China for the years to come.

A major revision of the Anti-Monopoly Law (Draft Amendment) is to improve the legal liability system for merger review. It significantly increases the amount of fines for failure to notify. Specifically:

where the notification threshold stipulated by the state council are not met, but there is evidence that the concentration of undertakings has or may have the effect of eliminating or restricting competition, the antitrust enforcement authority under the state council shall conduct an investigation in accordance with the law.

This provision is aimed at ‘killer acquisitions’ that have occurred frequently at home and abroad in recent years. Some internet giants, leveraging their huge capital advantages, carry out large-scale ‘killer acquisitions’, leading to a winner-takes-all situation. Under this provision, the antitrust enforcement authority may strengthen ex ante regulation to prevent distorting the competitive structure of the market through concentration. It is worth noting that major jurisdictions such as the European Union and the United States are also highly concerned about ‘killer acquisitions’ and are actively exploring updates of their merger review systems to allow law enforcement authorities to intervene in advance. The lessons learnt therein will also be of reference significance to future law enforcement in China.

The addition of a ‘stop the clock’ mechanism

The Anti-monopoly Law (Draft Amendment) also adds a ‘stop the clock’ mechanism for the review of concentration of undertakings, which is designed to deal with three common circumstances in the notification process: (1) the undertaking concerned fails to submit documents and materials as required, as a result of which the review cannot be conducted; (2) new situations or facts that have a significant impact on the review; (3) the restrictive conditions imposed on the concentration of undertakings need to be further evaluated and agreed by the undertaking concerned.

With regard to (1), the ‘stop the clock’ mechanism is less likely to be applied to the simplified review procedure, as in general, the substantive review of simple cases is commenced before the acceptance of the case. If no objections are received after the formal acceptance and public review, the SAMR is unlikely to request additional documents and information. If there are no competition concerns, the current deadlines are generally sufficient even without the ‘stop-the-clock’ mechanism. This provision is most likely applicable when, after the initial notification is submitted, there is a long delay due to unanticipated issues arising from the transaction, or the notifying parties cannot provide the documents and materials required within a short period of time. In such cases, the antitrust enforcement authority may initiate the ‘stop the clock’ mechanism to ‘urge’ the notifying parties to provide documents and materials as required.

With regard to (2), the ‘stop the clock’ mechanism will make it unnecessary that undertakings concerned need to withdraw the notification. The review period will commence after the transaction resumes normal, and the predictability of the review period will be enhanced. Compared with the mechanism of re-notification and restarting, the uncertainty of the transaction will be reduced to some extent.

Big hammer on failure to notify

Significant increase in the number of penalty cases 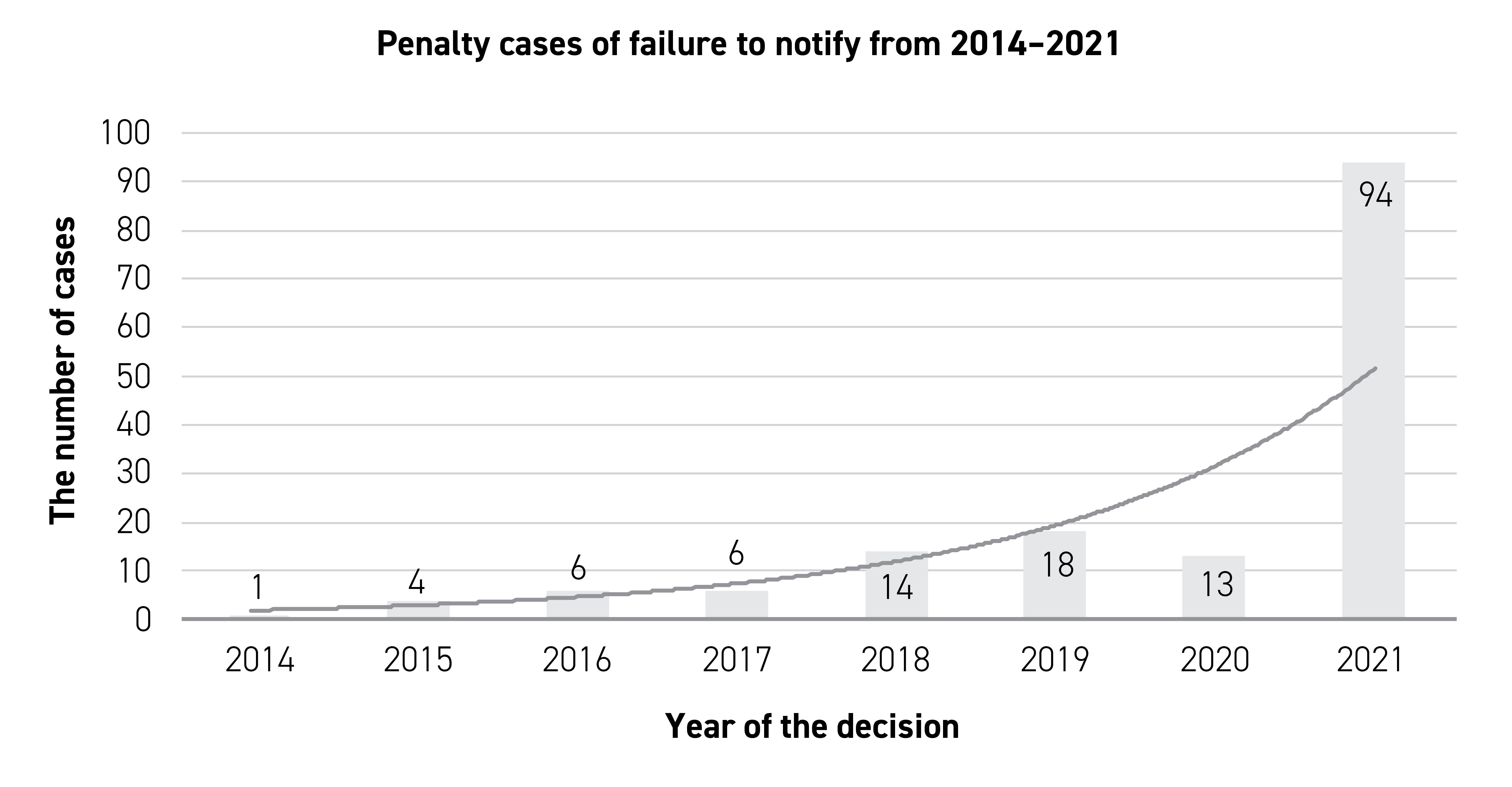 With regard to the cases of failure to notify by platform enterprises, from the end of 2020 to the end of 2021, the SAMR in total released five batches of cases, of which the number of cases reached 84. In addition, in the case of the equity acquisition of a music company by a large domestic internet platform enterprise, the SAMR not only imposed penalty for failure to notify, but also found that the transaction had the effect of eliminating or restricting competition in the relevant market, subsequently ordering the enterprise to take remedy measures to reinstate the competition status in the relevant market.

In a penalty decision on the failure to notify an equity acquisition of an internet platform released in July 2021, the antitrust enforcement authority determined that the transaction had the effect of eliminating or restricting competition in the relevant market of online music playing platform market within the territory of China. Based on this, in addition to imposing a maximum fine for failure to notify, the antitrust enforcement authority for the first time applied article 48 of the AML in mandating the concerned parties to take necessary measures to restore the pre-concentration status.

This case, to a certain extent, is consistent with where Anti-Monopoly Law (Draft Amendment) is headed. According to the Anti-Monopoly Law (Draft Amendment), penalties for failure to notify are further distinguished between those that have the effect of eliminating or restricting competition and those that do not – for the former, penalties include both reinstating the pre-concentration status and an increase in the amount of fines to less than 10 per cent of the previous year’s sales amount; and for the latter, only a fine will be imposed, but the upper limit of the fine will be increased to 5 million yuan. 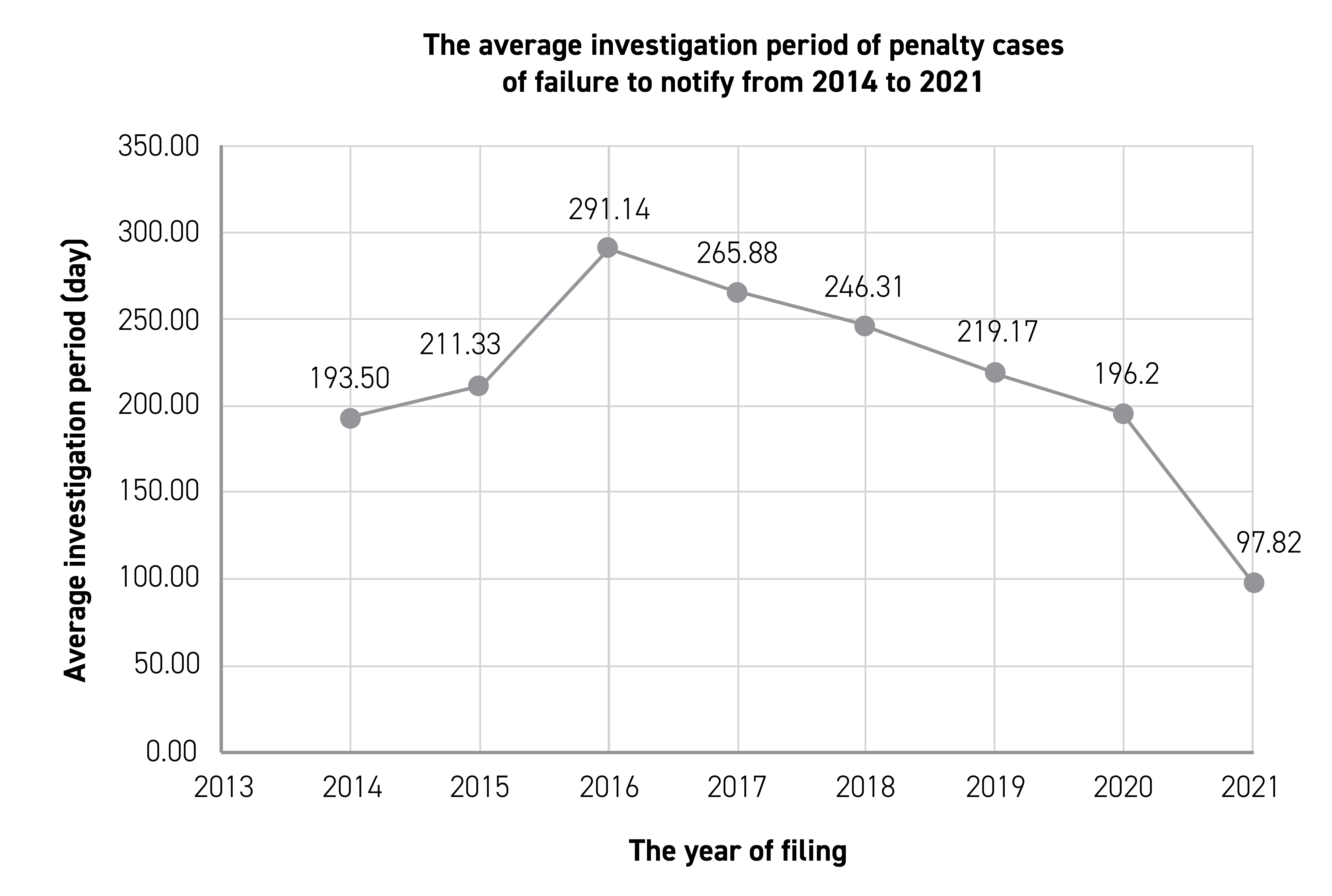 Industries closely related to people’s livelihood, such as automobile, medicine and public utilities, still receive significant regulatory attention. In 2021, financial enterprises such as banking and insurance also began to enter the regulatory radar, and the antitrust enforcement authority announced several penalty cases against the financial industry. This also echoes the content of article 37 of the Anti-Monopoly Law (Draft Amendment), which clearly states that people’s livelihood, finance, technology, media, etc, are the key areas of focus in the review of concentration of undertakings.

Breakthrough in quantitative analysis in the merger review

Summary of cases with conditional approval

The following is a summary of the basic fact of cases subject to conditional approval or prohibition in 2021.

To analyse the possibility of unilateral price increase after the transaction, in the acquisition of MTS Systems Corporation by Illinois Tool Works Inc, the authority also calculated the gross upward pricing pressure index (GUPPI) to illustrate the possibility of price increase after the transaction. According to public information, this is the first time that the authority provided the calculation data of the GUPPI in a formal decision.

The antitrust enforcement authority will usually focus on market entry barriers when analysing market structure. High entry barrier is an important prerequisite for the post-transaction entities’ ability to unilaterally raise product prices. Based on previous cases, the authority tends to impose behavioural remedies for the post-transaction entities to prevent it from raising prices by leveraging favourable market position. However, such behavioural remedies cannot fundamentally change the market structure. In the acquisition of Intel SSD businesses by SK Hynix above, the authority required the post-transaction entity to help a third-party competitor enter the relevant market. According to public information, this is the first time that the post-­transaction entities are required to help a third party competitor enter the relevant market as a remedy in a formal decision.

From the announcement of the Antitrust Guidelines for Platform Economy at the beginning of the year to the issuance of the Anti-Monopoly Law (Draft Amendment) at the end of the year, and further to the recent establishment of the National Antimonopoly Administration, 2021 is undoubtedly a milestone year in the merger control regime in China.

Firstly, the Anti-Monopoly Law (Draft Amendment) proposes a series of new rules in the merger control area with the aim of improving the procedural efficiency of merger review and enhance the legal liabilities for failure to notify.

Third, since developing a healthy and competitive digital economy has been a focal point in China’s industrial policy, we believe that the antitrust enforcement authority will be empowered to continue to closely scrutinise transactions by platform enterprises in the digital economy.

In this context, we recommend that enterprises strengthen internal merger control compliance management. On the one hand, it can prevent a company’s reputational or financial losses caused by regulatory penalties. On the other hand, it can enhance a company’s reputation and increase the company’s brand value. We hope that through our joint efforts, we have provided readers with a deeper understanding of the complexity of Chinese merger control regime in 2022.