Zhan Hao, Song Ying and Stephanie Wu lead the competition practice at ANJIE LAW FIRM, which is active in most of the major antitrust cases before the SAMR. They are assisted by another partner and more than 10 associates who spend at least half of their time on competition matters. The team counselled a Chinese aerospace state-owned enterprise on antitrust issues regarding its cooperation with a major European airliner on a joint business project. The firm advised a state-owned petrochemical company regarding the establishment of a joint venture with a global petrochemical manufacturer, securing clearance in less than 50 days.

Five AnJie lawyers act for a TDI manufacturer in private antitrust litigation brought by a Chinese mattress manufacturer against four TDI companies for an alleged horizontal agreement. TDI is a component of polyurethane, which in turn goes into mattresses. The firm is advising an automotive original equipment manufacturer in response to the SAMR’s investigation of the auto industry. The European Commission’s launching of a probe of five German OEMs in 2017 prompted the Chinese watchdog to see whether the alleged cartel had any influence on the Chinese market. AnJie is also advising an internet company in the first investigation of the internet industry since the SAMR was established in 2018. The investigation centres on a complaint filed with the SAMR’s predecessor agencies regarding the digital music market and upstream copyright licensors, and raises important questions of enforcing competition law in the digital economy. AnJie is also acting for a global domain name registry company against several abuse of dominance allegations.

As one of the most experienced and highly acclaimed antitrust/competition practices in China, AnJie provides its clients with a full range of competition law services, including administrative investigation, civil litigation, merger control filing, and compliance consultancy. AnJie’s antitrust practice has been repeatedly recognized by international publications, such as Chambers & Partners, Who’s Who Legal, The Legal 500, China Law and Practice, Expert Guides and ALB. Chambers & Partners has honored AnJie professionals as its recommended competition/antitrust lawyers in every annual edition since 2012. The managing partner of AnJie, Dr Zhan Hao, is a leading expert in private antitrust litigation. Under the leadership of Dr Zhan and Ms Song Ying, another partner at AnJie’s Beijing office, the antitrust team regularly assists clients in the highest-profile antitrust actions in China. The team has represented such names as Sinopec in winning an appeal in China’s first antitrust lawsuit in the petrochemical industry; Panasonic in winning a monopolization case filed by a distributor; Hitachi Metals in defending against rare earth companies’ claims over SEP issues. They also represented a renowned zip manufacturer, in an abuse of dominance case; an domain operator, in successfully defending against antitrust lawsuits; and are representing the first non-follow-on antitrust private litigation against horizontal monopoly agreement.

AnJie also has extensive experience and expertise in assisting clients to better handle government investigations, many of which involve high stakes and are closely followed by practitioners, such as the pending DRAM probe. AnJie’s clients operate in a broad range of sectors including online entertainment, automotive, online platforms, semiconductors, LCD, infant milk, insurance, PVC, ports, software, petroleum and consumer products. Notably, in an action launched by the former National Development and Reform Commission against international auto parts manufacturers, AnJie advised and successfully obtained a fine reduction of around RMB 50 million for its client. AnJie has represented hundreds of enterprises in merger control filings, all of which were successfully cleared. The firm handled the China filing for the $43 billion concentration between ChemChina and Syngenta, one of the largest overseas acquisitions by a Chinese state-owned enterprise to date, and obtained unconditional clearance from the Ministry of Commerce. In the filing of a technology joint venture between INEOS and Sinopec, AnJie efficiently advised and secured approval without an extension of the review period. AnJie’s clients range from large SOEs to multinational firms, active in numerous industries including automobiles, shipping, chemical, energy, finance, pharmaceuticals, transportation, machinery, electronics, textiles, aviation, consumer goods, software, and healthcare. The extensive and seamless cooperation with international law firms allows AnJie to effectively coordinate multijurisdictional filings and advise clients in competition matters on a global scale. 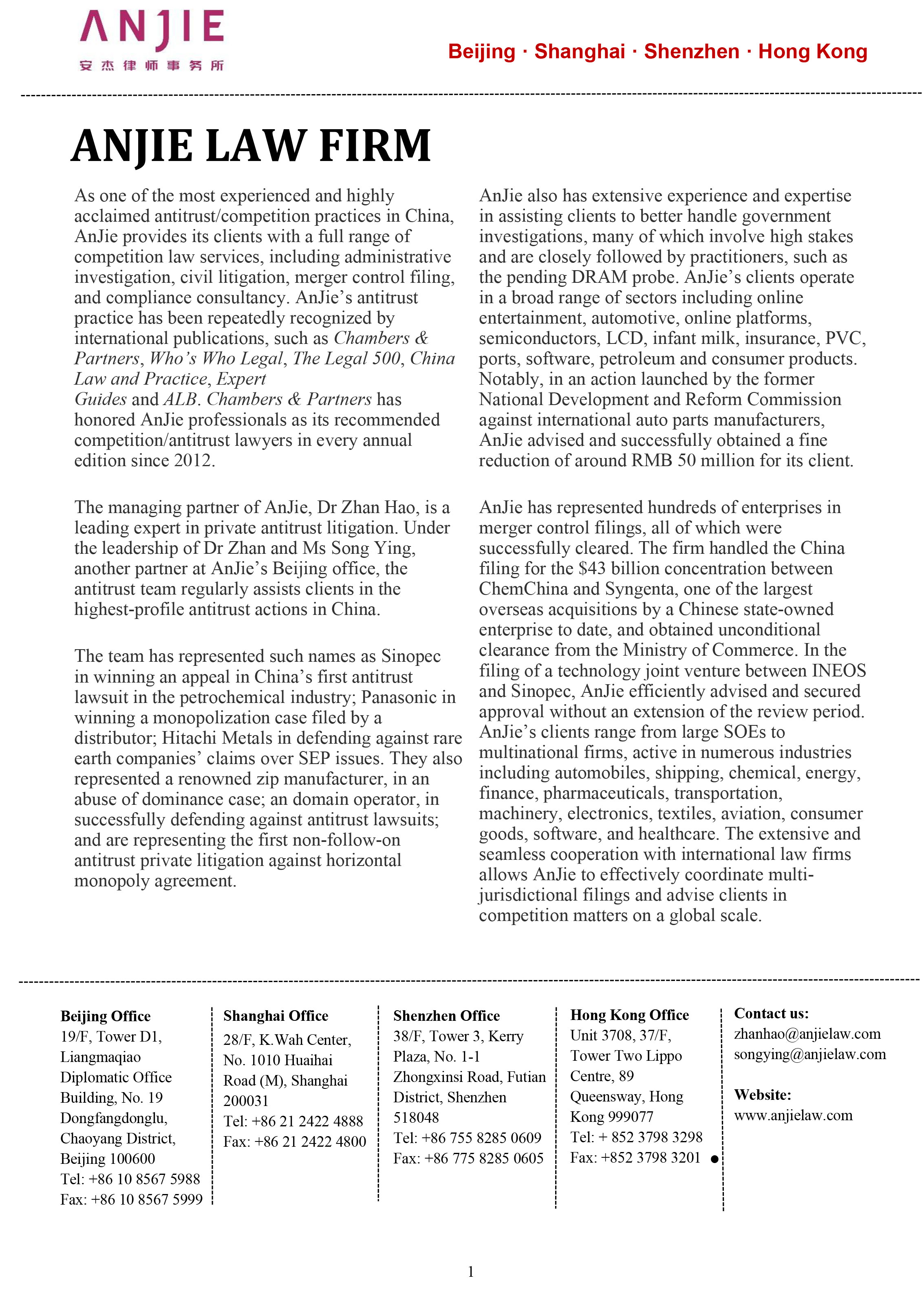