Paul Collins leads STIKEMAN ELLIOTT’s competition team, which spent much of the past year dealing with markets 1,000 metres up. The firm is representing Air Canada on its proposed purchase of Transat AT, and the company’s defence against class actions alleging a conspiracy to fix prices for cargo air freight shipping services. The team guided Airbus past competition and foreign investment reviews related to a partnership with Bombardier, and United Technologies through the merger of its aerospace business with Raytheon after previously securing approval for United’s purchase of Rockwell Collins.

Back on the ground, the firm acted as Canadian counsel for Wabtec in its merger with GE Transportation, combining two of the largest rail equipment and services providers. Stikeman is acting for Global Payments in its merger with fellow payments provider TSYS. The team acted for Empire on its purchase of Farm Boy, which included 26 stores in Ontario; the Competition Bureau approved the deal after a Phase I review.

The team also advised Bayer as its Canadian counsel related to its purchase of Monsanto following a lengthy global review of the deal. The team also guided Bayer on the sale of its seed and traits business to BASF in one of the largest antitrust-related divestitures in history. On the conduct side, Stikeman is advising one of the five defendants accused of participating in a conspiracy to manipulate rates for credit card interchange fees.

The firm is one of the most active transactional law firms in Canada, and holds a deep understanding of the competitive dynamics of Canada’s major industrial and commercial sectors. As such, they can effectively evaluate and structure transactions to manage the risk of regulatory intervention by the Commissioner of Competition and other governmental agencies. The team, which includes Paul Collins, Michael Kilby and Michael Laskey in Toronto, has acted on the most noteworthy foreign investment transactions in recent years, representing both Canadian targets and foreign purchasers. Susan Hutton and Lawson Hunter also have highly active regulatory practices in the firm’s Ottawa office.

Stikeman Elliott’s award winning-competition litigation (awarded Litigation Law Firm of the Year) practice is a recognized market leader, with top ranked counsel including Katherine Kay (described as “arguably the best competition litigator Canada has to offer” in a past GCR Country Survey), and internationally-ranked Eliot Kolers and Danielle Royal handling the full spectrum of client issues, from cartel investigations, prosecutions and resolutions, to immunity and leniency applications, to contested mergers and other civilly reviewable matters before the Competition Tribunal, to defence of class actions and other lawsuits alleging competition law violations and economic torts. The team's reputation for vigorous advocacy and strategic focus on our clients’ interests, in the courtroom and at the negotiating table, serves clients as they face the Competition Bureau, Public Prosecution Service of Canada, and class action plaintiffs. 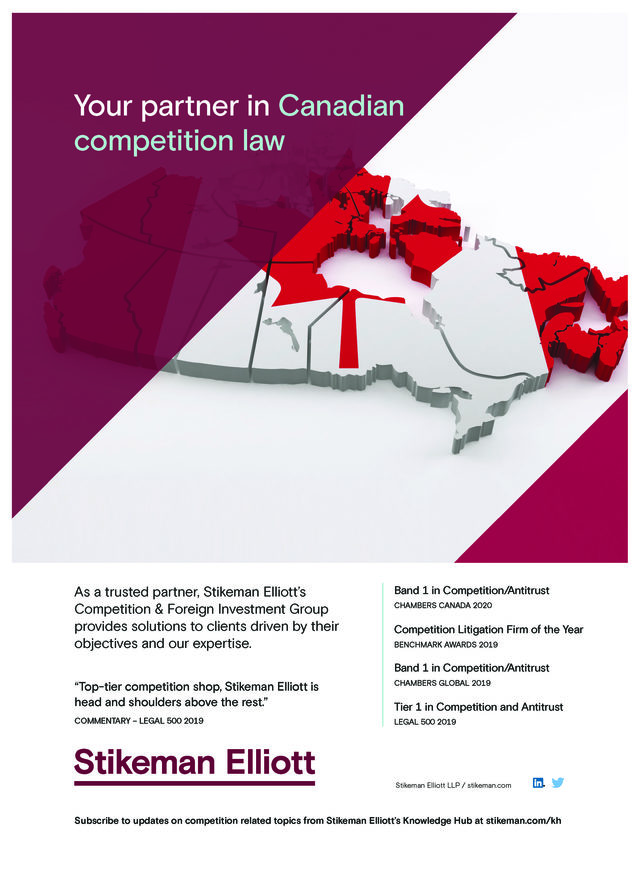