Talya Solomon leads the competition practice at HERZOG FOX & NEEMAN, which also features partner Iri Achmon and three associates. The team acted for The Walt Disney Company and 21st Century Fox in the Israel aspect of the companies’ global merger, and is representing Applied Materials in its proposed acquisition of Kokusai. The firm acted for airline Arkia in objecting to the now-abandoned merger of El Al and Israir. In behavioural work, the team is counsel to the Egg and Poultry Board in a class action related to a chicken meat cartel, as well as a bakery in a separate action following the alleged bread cartel. The team is also representing two officers of Ashdod Port, one of Israel’s main maritime gateways, in a case related to the violation of the country’s monopoly law.

The department has vast experience in advising on a broad range of matters of antitrust and competition law in Israel. This includes appearing before the Israeli Competition Tribunal and the ICA; representing clients in prominent civil and criminal antitrust litigation, including antitrust class actions; and advising on all antitrust matters (such as mergers, abuse of dominant position, cartels and restrictive arrangements).

The team's experience, expertise, deep knowledge of the ICA, cooperation with the firm’s departments and international capabilities, all allow the team to offer its clients out-of-the-box solutions tailored specifically to their commercial needs, and to assist them take a stance in court when necessary.

The department's key clients include some of the largest companies in Israel. Such as;

The department also advises international companies such as HP, Philips, MSD and GE on their day-to-day activities and compliance efforts in the field of competition law.

Furthermore, the department is involved in the litigation of prominent cartel class actions (including international cartels) and excessive pricing class actions.

As well, the department is involved in some of the highest-profile cases featuring complex and cutting-edge competition law issues, as well as Israeli aspects of the largest merger transactions worldwide. It has advised on cases such as the Disney - Fox transaction and Mellanox on the bidding process, which ended with its intended acquisition by NVIDIA.

Talya Solomon is a partner and the head of the Antitrust and Competition department, with over 20 years of experience. She is a former Team Leader in the ICA's legal department and has extensive experience representing clients before the ICA and the Israeli Antitrust Commissioner.

Talya has litigated in some of the most prominent competition law cases in recent years, including several notable class actions, as well as the first cases of administrative fines for monopoly abuse. Talya has an impressive track record of success in managing antitrust litigation cases including antitrust class actions.

Talya Solomon is an undoubted leader in this field and is a force in the Israeli market, recognised as such by competitors and clients alike. Talya is often invited as a lecturer to competition panels and teaches competition law at the College of Management.

Iris Achmon is a partner in the Antitrust and Competition department, a former member in the ICA, and with nearly 20 years of experience, including extensive experience in representing entities before the ICA and the Antitrust Tribunal.

Iris specialises in representation and advice to multinationals concerning their activity in Israel, first and foremost with regard to complex merger transactions, but also concerning the day-to-day conduct of companies with significant exposure to antitrust and competition laws. Iris regularly advises companies on antitrust compliance, including processes of implementing and internalising new and existing competition regulation and dawn-raid procedures. 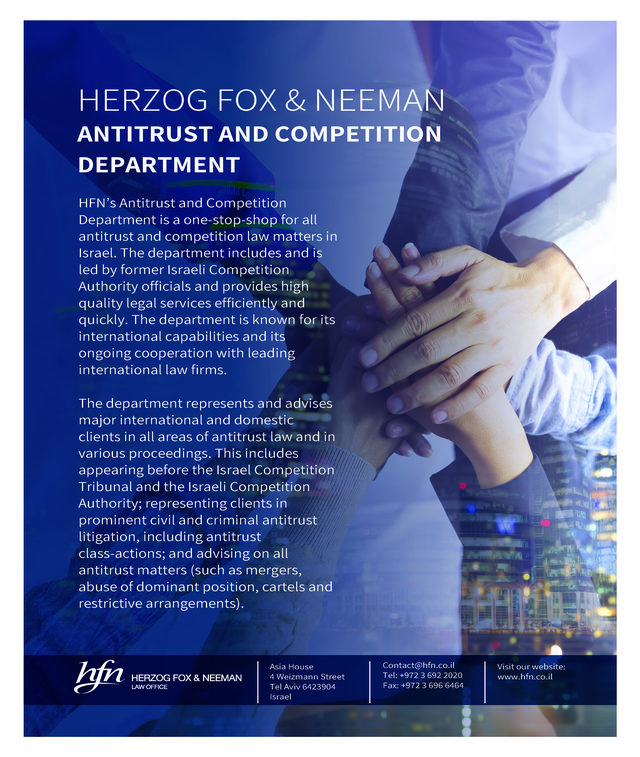