GLEISS LUTZ is proud to house one of the oldest competition practices in Brussels, which was established in 1962. The experienced Ulrich Soltész leads a group of two partners, one associated partner and three associates. He is part of the team representing Canon in its appeal against a €28 million gun-jumping fine in 2019 for allegedly starting the acquisition of Toshiba Medical Systems before notifying the agency. The practice is also kept busy defending Daimler against a raft of follow-on claims in multiple jurisdictions. The firm runs a well-respected state aid practice, and is working on several merger control files, including advising Plantronics and Polycom in their acquisition in the headphone market.

Ingo Brinker leads GLEISS LUTZ’s competition team, which includes eight other partners in Germany and two more in Brussels. He says the firm is “extremely busy” and he cannot remember a time when its resources have been so stretched. The German team is widely regarded as one of the firm’s most successful branches and it works closely with its Brussels office. Peers at rival firms highlight the work of Ulrich Denzel and Christian Steinle; along with fellow partners Brinker, Petra Linsmeier, Matthias Karl and Wolfgang Bosch, they are among the most highly regarded competition lawyers in Germany, according to Who’s Who Legal.

Brinker says the team is “one of the real experts” when it comes to classic cartel cases. It is advising German and international clients in more than 10 parallel investigations conducted by the European Commission, the Federal Cartel Office and other antitrust agencies around the world for allegedly participating in cartel activities in a variety of business sectors. In other behavioural work, the firm achieved a notable victory against the FCO in 2019, as the Düsseldorf Higher Regional Court ruled that Booking.com can include most favoured nation clauses in its contracts with hotel operators. The German enforcer had prohibited the reservations platform from enforcing the clauses that prevent hotel operators from offering lower prices on other sites. The firm is defending Deutsche Telekom against two damages claims brought by Vodafone and Unity Media. The cable network operators allege Deutsche Telekom charged inflated fees for using cable duets. Both cases are pending before the Federal Court of Justice, Vodafone’s case for the second time. The firm is also heavily involved in the Trucks litigation in multiple jurisdictions.

The team prides itself on its high-quality merger control work. It represented Schwenk Zement in its proposed acquisition of a cement plant from Opterra. The FCO took the deal to Phase II in 2017, and Schwenk ultimately abandoned the tie-up. Gleiss Lutz is also representing Remondis in its acquisition of DSD Der Grüne Punkt. After a lengthy Phase II probe, the German enforcer blocked the deal in July 2019 and the companies will challenge the decision in court.

Gleiss Lutz is one of Germany’s leading full service international law firms. With more than 300 lawyers, of whom 85 are partners, Gleiss Lutz advises major national and international companies in all areas of commercial law.

The Gleiss Lutz antitrust practice enjoys a stellar reputation and has been involved in shaping antitrust law since day one, having played an active role in all major international developments and cases for more than 60 years. The combination of experience, top-quality advice and a practice-oriented approach makes Gleiss Lutz one of the leading competition practices in Europe. 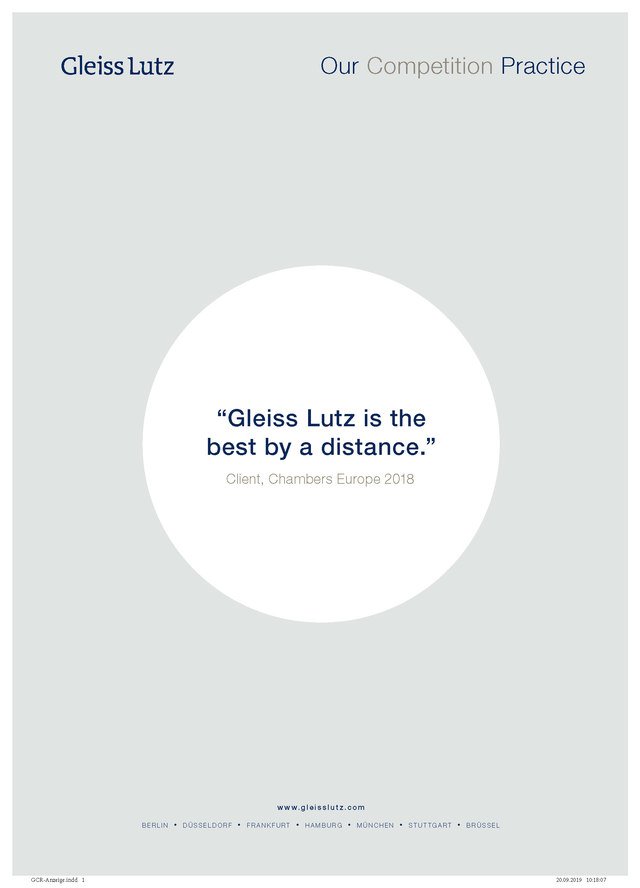