In merger control, the team acted for food producer Dr. Oetker in its acquisition of Alsa. The case involved the first decision with a fix-it-first solution, as France’s competition authority in January 2019 accepted that licensing a trademark to rival Saint Lucie would remedy its competition concerns about the Dr. Oetker/Alsa tie-up. The firm is assisting state-owned insurer CNP in its sale to La Banque Postale. In June 2019, the authority gave the go-ahead for state-owned investment firm CDC to transfer its stake in the insurance company to the banking arm of La Poste, to create a central state-owned financier and insurer. The team has also advised retail and automotive distribution group GBH on its acquisition of overseas retailer Vindemia from Casino.

In behavioural work, the firm is assisting Société Générale in the interchange fees cartel before France’s Supreme Court, as well as a major dairy producer in the dairy milk products cartel. It is also acting for Booking.com in an investigation of the online travel agency and litigation before the national competition authority and courts. Also in follow-on litigation, the team is advising MAN and Volkswagen in a damages action related to the Trucks cartel case. The firm recently secured the rejection of an interim measures application against RUBIS Oil Group for alleged abuse of dominance.

In particular, the department has a strong and well-known experience in antitrust litigation. It is involved in some of the largest and most important cases presently examined by the French Competition Authority (“FCA”) or the EU Commission.

The practice is also strongly focused on French and EU merger controls, with services ranging from feasibility studies to the preparation of notification files and assistance with negotiating the remedies to be offered to the competition authorities to obtain clearance of the transaction.

The team is also well versed in advising clients operating in industrial sectors where government authorities are involved, either directly or via a regulatory body, such as the energy, media, telecommunications, transport, postal services and health sectors.

In certain matters when necessary, the team relies on assistance from specialized economists and in cross-border transactions, the team works with its network of high-level local correspondents with expert knowledge of domestic competition law, allowing a perfect coordination of procedures before the various concerned authorities.

Drawing on their cross-disciplinary skills in distribution law, the Competition and Litigation teams work side by side to support clients in dealing with the many aspects of the product and services distribution process, including their relationships with commercial partners, with competitors, services of specific administrative agencies and consumers. Their skills combined cover a complete range of issues related to pricing practices, general sales terms, product regulations and commercial practices, as well as consumer protection and implementation of a distribution network. 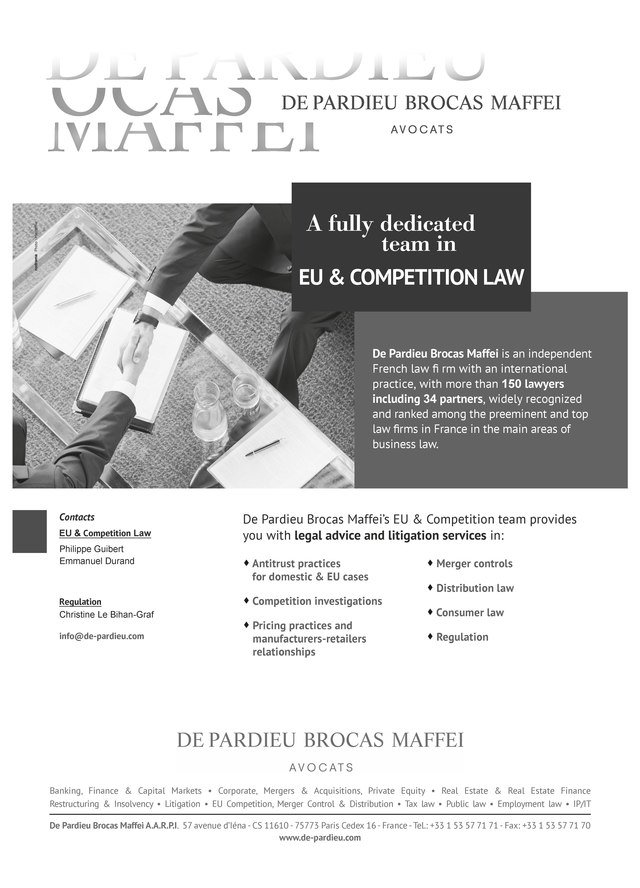