BLAKE CASSELS & GRAYDON continues to top the Canadian competition bar for size of practice and breadth of matters and is considered “the firm to beat” by several of its rivals. Practice head Brian Facey leads a team boasting 23 partners and 16 associates. Partner Randall Hofley joined Canada’s Competition Bureau in January 2018 for a two-year term as general counsel and senior enforcement adviser.

The firm sported another strong year in deals. It acted as lead Canadian counsel for Harris on the defence company’s merger of equals with L3 Technologies, for which Blakes coordinated with counsel in Europe and the US. The practice acted for Praxair on a merger with fellow “big four” gas supplier Linde. In other multinational deals, it advised Essilor on its vertical merger with Luxottica, which required approval in the EU, US, Canada and China; open source cloud software company Red Hat on its acquisition by IBM; and GlaxoSmithKline on its joint venture with Pfizer.

Blakes is defending several automotive companies facing class action proceedings in Ontario, Quebec and British Columbia alleging a conspiracy to fix prices for certain automotive parts. The firm has a role in more than half of the 40 different class actions, including those involving auto lights, bearings, fuel injection systems and ignition coils. It also secured a settlement on behalf of Visa against a lawsuit challenging its and Mastercard’s interchange and merchant fees.

The Blakes competition, antitrust & foreign investment group is widely acknowledged as one of the leading practices in Canada. Named “Competition Law Firm of the Year” for 2018 by Benchmark Canada, Blakes houses a formidable team of practitioners with recognised expertise in every aspect of competition law and foreign investment review. The competition group is frequently retained by major domestic and international companies, and by international and domestic law firms, to provide strategic counsel and representation in merger reviews, cartel investigations, abuse of dominance cases, distribution practices, advertising matters and other competition issues. Blakes’ lawyers have been involved in the largest and most complex mergers in Canadian history, and have led the Canadian aspects of some of the largest global transactions, including internationally recognised innovative matters. Blakes is also a leading firm with respect to securing merger approvals for non-Canadian purchasers under Canada’s foreign investment laws.

Blakes is at the forefront of high-profile competition litigation matters, including contentious mergers, advertising, abuse of dominance, reviewable trade practices and other civil matters before the Canadian Competition Tribunal, the Federal Court of Appeal and the Supreme Court of Canada. Blakes’ lawyers also appear before the superior courts and the Supreme Court of Canada on criminal matters and class actions.

Blakes has a proven track record of success in acting for clients on multinational transactions and investigations where coordination among counsel and agencies in the United States, Europe and other jurisdictions is a paramount objective. Blakes’ lawyers understand how Canada’s competition and foreign investment laws fit within the broader context of complex corporate transactions and business affairs. The firm’s vast resources and leading expertise in virtually every area of business law enables its lawyers to provide clients with the timely, practical and strategic advice necessary to ensure compliance with competition laws while facilitating their transactions and assisting them in realising their business objectives. 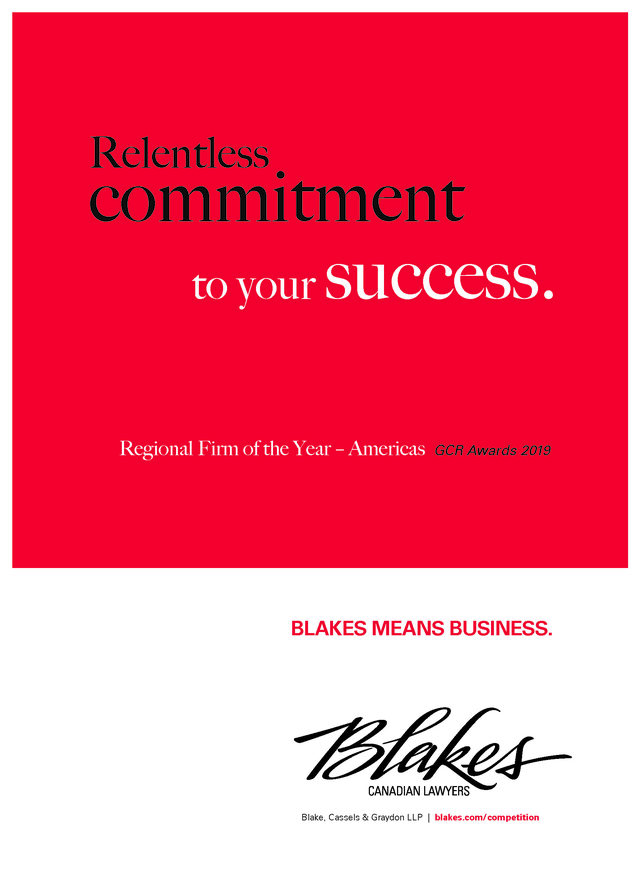