Rounding out this year’s Global Elite rankings and making an appearance after a two-year hiatus is O’Melveny & Myers. The firm boasts 16 competition partners across offices in Washington, DC, New York, Brussels, San Francisco, Century City, Tokyo and Hong Kong – although that list expands to Los Angeles, Shanghai and Beijing when counsel and associates are taken into account. The firm added partners Benjamin Singer from the US Department of Justice’s criminal division in July 2018 and Anna Pletcher from the Antitrust Division in August 2019. Those additions followed the high-profile departures of Richard Parker and Ted Hassi in the summer of 2018.

By far the most headline-grabbing deal on which O’Melveny worked was AT&T’s acquisition of Time Warner, which was challenged in 2018 by the DOJ’s antitrust division. A Washington, DC federal court approved the takeover in early June 2018; an appellate court affirmed that decision in February 2019. Partner Katrina Robson led the competition team throughout the trial. While not as high-profile, O’Melveny acted for Finisar in its acquisition by II-VI, which necessitated complex competition work in the US, China, Mexico, Romania, Austria and Germany. That deal closed in September 2019. The firm also counselled a private equity firm through a DOJ second request regarding the merger of a portfolio company with another company.

O’Melveny remains active on a few cartel cases, although not much registered for our metrics in the past year. The firm did secure immunity for insurance provider Seguradoras Unidas in Portugal’s competition authority’s probe of market allocation and bid rigging in the insurance sector. O’Melveny also managed to convince the DOJ not to file charges in a case surrounding an industrial product. The firm has a solid dossier of casework in private litigation, including acting for US Airways in a several-years-long battle against global distribution system Sabre, which the airline has accused of monopolising the market for distribution services. O’Melveny is also acting for Global Music Rights as both a plaintiff and a defendant in an antitrust court battle with the Radio Music License Committee over music licensing practices. 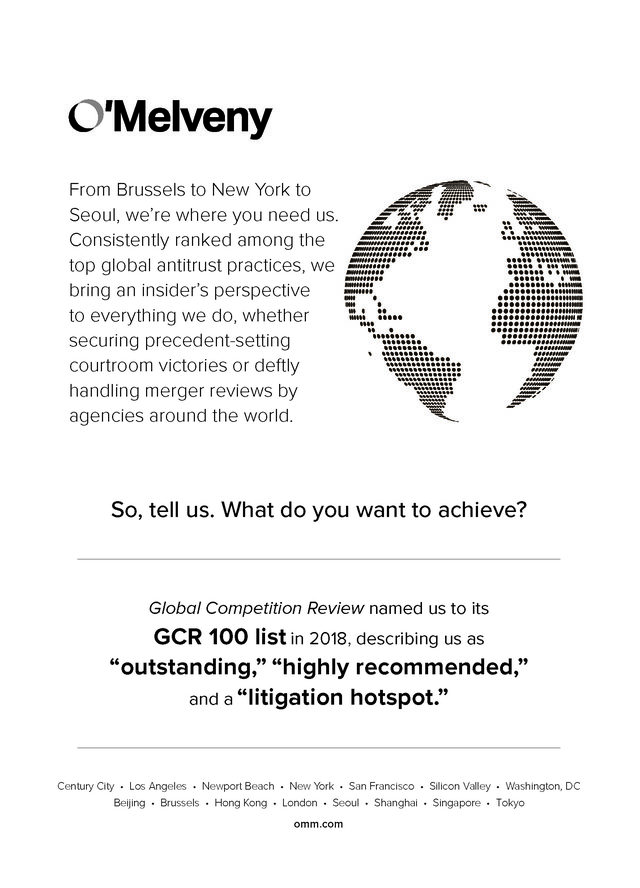