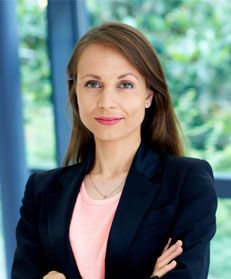 Yelena Trifounovitch, partner at Bredin Prat, is a member of the competition team. She has outstanding experience in French and European competition law (abuses of dominant position, cartels, merger control, state aid, private enforcement) with an advisory and litigation practice before French and European competition authorities and courts. She has developed a specific expertise in the areas of regulated sectors and, in particular, in the electronic communications, audiovisual media services, television broadcasting services, energy, pharmaceutical and transport sectors. She is notably recognised for her expertise and technical knowledge in new technologies. Yelena Trifounovitch is praised as a leading competition lawyer and has been notably named in Global Competition Review’s 40 Under 40 list, which recognises the world’s top antitrust and competition specialists under the age of 40.

She was admitted to the Paris Bar in 2007 and holds postgraduate law degrees from the University of Paris II Panthéon-Assas (Master of Laws in European business law, 2004; master’s degree in European law, 2003). She teaches competition law and litigation at Panthéon-Assas University (Paris). She is fluent in French, English, Bulgarian and Serbian.