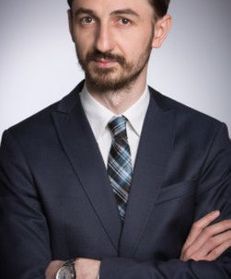 Paul George Buta, head of the competition law practice of Mușat & Asociații, is one of the most skilled litigators of competition law claims in Romania, with a practice stretching back for more than 12 years. Having acquired a double specialisation in both political sciences and law, Paul has pursued both an academic career, during which he obtained a PhD in law, as well as a career as a practicing attorney, being involved in some of the most noted proceedings heard by Romanian courts.

Apart from the litigation activity, Paul is involved in every antitrust mandate currently managed by the firm, taking an active role in devising defence strategies in competition law investigations, including forensic procedures, as well as in representing the firm’s clients before the Competition Council in hearings and other administrative procedures. Paul’s legal practice in the field of competition law is also complemented by his background as an academic (Paul holds a teaching position at the law school of the Nicolae Titulescu University in Bucharest) and as a specialist in intellectual property matters, being uniquely positioned in the Romanian market to provide complex advice to clients on issues that entail the intertwining of antitrust and IP issues.

Paul’s work involves managing complex mandates entrusted to him by world-renowned clients, from various industries, such as media and TV, pharmaceuticals, IT and telecommunications, fast-moving consumer goods, banking and financial, automotive, and retail.