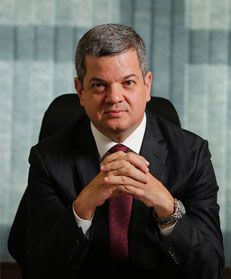 CADE’s president, Alexandre Barreto de Souza, holds a master degree in management, a specialisation in public management and a bachelor degree in management from the University of Brasília. He is a federal auditor of external control of the Federal Court of Accounts (TCU). From 2000 to 2005 he worked at the Federal Senate as a technical adviser assigned by the TCU. At the TCU, he was the director responsible for the monitoring of state-owned financial institutions between 2010 and 2013. He was also the director of the areas responsible for the control over public bids and contracts for all public administration, between 2013 and 2014. He has more than 25 years of experience in the public sector, including in the areas of procedural reform, fraud prevention and prevention of bid-rigging. In addition, he worked as chief of staff of a minister of the TCU.