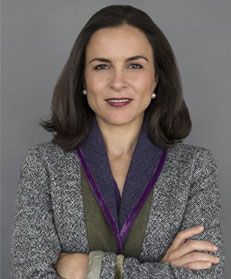 Alejandra Palacios Prieto was appointed chairwoman of the Mexican Federal Economic Competition Commission (COFECE) in September 2013 for a four-year term. Ms Palacios holds a master’s degree in business administration and a bachelor’s degree in economics from the Instituto Tecnológico Autónomo de México (ITAM). She also holds a master’s degree in public administration and public policy from the Centro de Investigación y Docencia Económicas. Prior to her appointment at the COFECE, Ms Palacios was director of good governance projects at the Mexican Institute for Competitiveness, a Mexican public policy think tank, where she was responsible for research projects in the economic regulation, public procurement and telecommunication areas, among others. She also served as a consultant for the former Federal Telecommunications Commission and the Mexican Institute for Social Security, mainly focused on carrying out research and evaluation projects derived from collaboration agreements among these institutions and the OECD. She has been a lecturer and academic coordinator in the economics department at the ITAM.