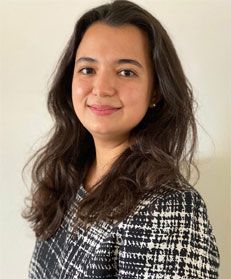 Adriana Peralta joined Galicia Abogados in 2017 as a law clerk in the Antitrust practice area. Her work is focused on general advisory in anticompetitive practices, as well as mergers and acquisitions, governamental investigations, requests to participate in bidding processes before the Federal Economic Competition Commission. The sectors/ industries in which she has specialized have been: energy, pharmaceutics and ports.

Adriana worked from 2016 to 2017 in the Federal Economic Competition Commission as an auxiliar of the  Merger Control Direction, analizing cases in hydrocarbons, ports and railways. Also worked from 2015 to 2016 in Goodrich, Riquelme y Asociados, S.C. in the litigation area. Adriana studied law at Universidad Panamericana (2016) and has a degree in Antitrust from the Centro de Investigación y Docencia Económicas (2017).