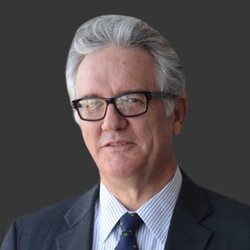 John F. Cove, Jr is a partner in the Litigation and Antitrust practice of Shearman & Sterling’s San Francisco office.

John represents clients in federal grand jury investigations of alleged cartel activity and other criminal offenses, in premerger reviews before federal and state antitrust authorities, and in investigations and proceedings by competition authorities outside the United States. In addition to his antitrust work, he maintains an active securities and general commercial litigation practice, and has defended corporations and individuals in class and non-class actions alleging securities fraud and related offenses in federal and state courts, and in proceedings with the SEC.

John is a former trial attorney with the Antitrust Division of the United States Department of Justice, where he prosecuted criminal price fixing and bid rigging cases, conducted premerger reviews, litigated challenges to anticompetitive mergers, and served as a senior member of the trial team in United States v. Microsoft. He also served as a Special Assistant United States Attorney for the Northern District of California.

In addition to his Government service with the Department of Justice, John spent two years as a clerk for the Hon. Edward D. Re, Chief Judge of the United States Court of International Trade.