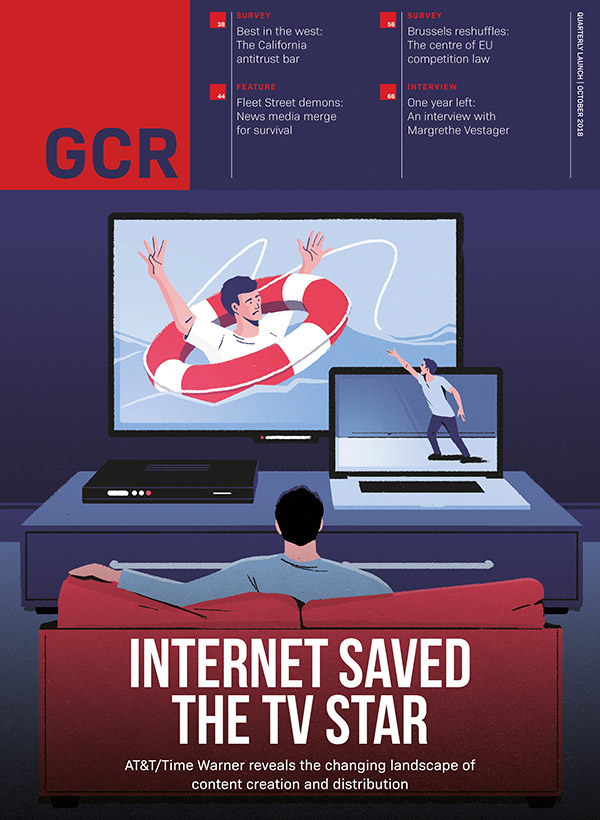 The eyes of the antitrust world remain locked on Brussels, where the European Commission in recent years has attracted global attention for its headline-grabbing enforcement. Tom Madge-Wyld and Tom Webb rank the city’s best firms, evaluating which are doing the most challenging work above and below the radar.

The demons of Fleet Street

Technology companies have fundamentally altered the news industry – at least, that is the argument made to competition enforcers by news media companies that want to merge. Janith Aranze explores the analytical framework around such deals, and what the future holds for an industry trying to adapt to the digital landscape.

In June, the US Department of Justice lost its lawsuit to block the merger between AT&T and Time Warner. Charles McConnell and Pallavi Guniganti explore how the changing landscape of content creation and distribution enabled the third-biggest telecommunications company in the world to buy what was once the largest media company.

In July, the European Commission finally issued its second long-anticipated decision against Google. This time, the EU competition enforcer found that the company had abused its dominance in several markets by imposing restrictions on its Android mobile device operating system. Tom Madge-Wyld gauged the opinions of several lawyers on these findings and their consequences, the theories of harm, the remedy, and the wider implications the case may have for enforcement in the technology sector.

A view from Brussels

Margrethe Vestager began her five-year term as European commissioner for competition in November 2014. With 18 months remaining, she spoke with Tom Madge-Wyld in May about falling leniency rates, hotel booking-style cross-border investigations, the need for interim measures and the purpose of her global public relations push.

As the world’s fifth-largest economy, the state of California and its local enforcement agencies feed a sizeable antitrust bar. Pallavi Guniganti looks at the best of the West Coast.

Two sides of the Atlantic on two-sided markets

At the end of June, the US Supreme Court used the term “two-sided market” for the first time. Its American Express ruling promises to fuel many years of debate, including whether the US court has diverged from its European counterpart’s 2014 judgment in Cartes Bancaires. Three Dechert lawyers – partner Michael Weiner in New York; and partner Alec Burnside and associate Adam Kidane in Brussels – take a trans­atlantic look at the question.