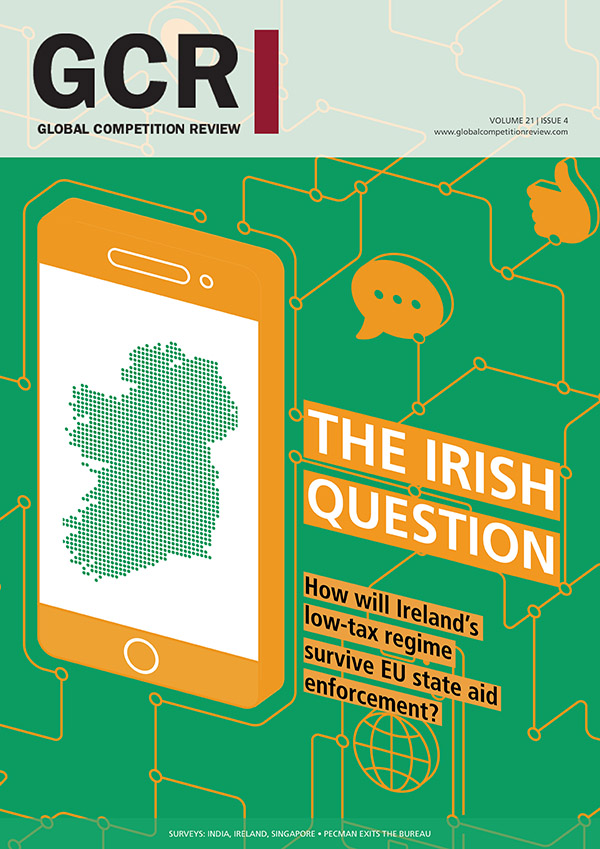 Ireland’s close relationship with multinational companies has agitated the European Commission, which accuses it of offering anticompetitive state aid. Hettie O’Brien looks at whether the small nation can afford to lose its corporate allies

Only five firms handle most of the major antitrust work in Singapore, where the competition authority has made large strides in recent years and is the clear leader among its counterparts in the Association of Southeast Asian Nations. Charles McConnell spoke with lawyers on the small island with a big commercial influence

An interview with Brian McHugh

Brian McHugh joined Ireland’s Competition and Consumer Protection Commission last August after spending 15 years at Northern Ireland’s Utility Regulator. He spoke with Pallavi Guniganti in late May about how his experience as a regulator applies to his role as a commissioner; the use of behavioural economics; and the CCPC’s push for the empowerment of national competition authorities

Half a dozen or so outstanding antitrust lawyers lead India’s competition bar, which continues to grow despite operating in a country where government officials often appear sceptical of a Competition Commission that attracts criticism from lawyers and lawmakers. As the ongoing trials and tribulations of India’s competition authority feed this expanding practice area, Tom Madge-Wyld ranks the firms tackling the most important work

The view from the left coast

As a deputy attorney general in the antitrust section of the California Attorney General’s Office, Emilio Varanini has a front-row seat in watching for competition problems that might arise in the world’s fifth-largest economy. He talked with Pallavi Guniganti about how he and his colleagues are prioritising antitrust enforcement in the Trump era

An interview with Devender Kumar Sikri

Devender Kumar Sikri stepped down as chairman of the Competition Commission of India on 12 July. He spoke with Tom Madge-Wyld about the enforcer’s due process record, as well as the need for new fining guidelines and other potential changes to the country’s Competition Act