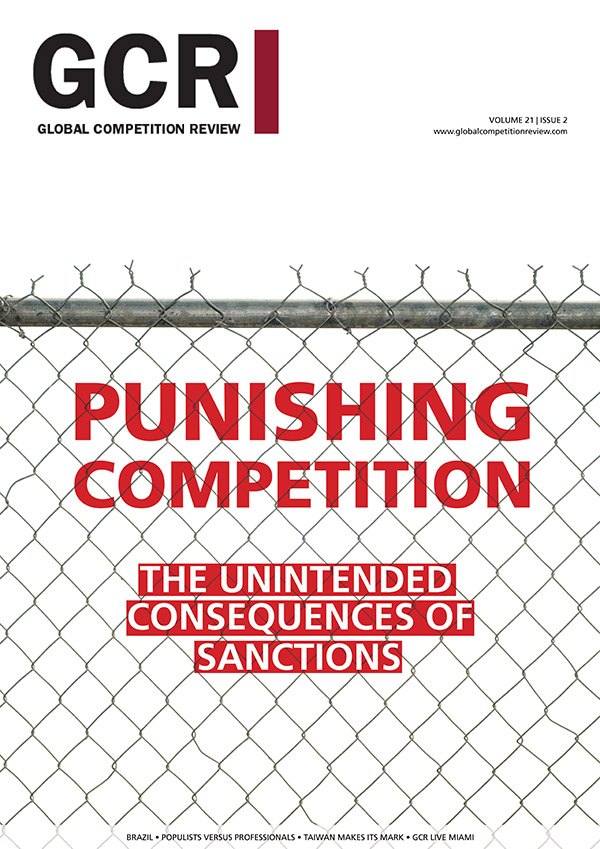 The Unintended Consequences Of Sanctions

Greece’s competition practitioners remain steady and active in the face of considerable economic unease and political upheaval. Malina McLennan reviews the heavyweights of the Hellenic bar

Taiwan’s antitrust law has rapidly developed from negligible to sophisticated. Tom Webb sees who’s getting the best work from this maturing competition regime

In April 2017, Brazilian president Michel Temer appointed former ministry official Alexandre Barreto de Souza as president of Brazil’s Administrative Council for Economic Defence (CADE). In an interview at the BRICS conference in Brazil last October, Charles McConnell asked Souza about his first months at CADE and what the future might hold for the Brazilian enforcer

The years of “file and forget” are a bygone era for Brazil’s antitrust lawyers, who face off against one of the best enforcers in the world in the Administrative Council for Economic Defence, and comprise a legion of accomplished and savvy competition specialists across a score of law firms. Charles McConnell sees how the firms stack up to each other three years after GCR’s last Brazil bar survey

An interview with Mei-Ying Huang

Mei-Ying Huang, the chairwoman of Taiwan’s Fair Trade Commission (TFTC), sat down with Tom Webb to discuss the agency’s priorities, relationships with other Asian competition enforcers, and response to the growth of the digital economy

Power to the people

The political left and right increasingly coincide in populism, which can conflict with the professional class of competition enforcers. Malina McLennan looks at the battles over agency independence brewing across Europe

When a country misbehaves in the eyes of others, it may find itself on the receiving end of sanctions. Charles McConnell explores how this punishment for political actions can affect economic concentration and competition

Taiwan’s antitrust enforcer has quickly made a name for itself. Tom Webb assesses how it has evolved – and where it still needs to improve

An interview with Dimitrios Kyritsakis

The Greek government appointed Dimitrios Kyritsakis, former Supreme Court judge, as president of Greece’s Competition Commission in September 2009. Since then, he and his colleagues have raised the competition authority’s profile well above what is expected of agencies in smaller European jurisdictions. Malina McLennan spoke with him in Athens last autumn