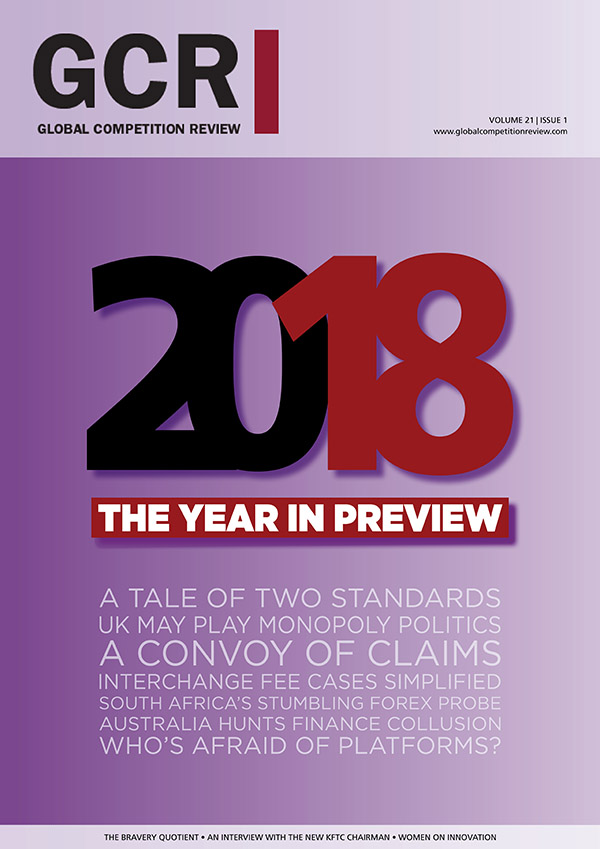 The Year In Preview

Last year, the Competition Commission of South Africa accused a host of global banks and their affiliates of colluding on foreign exchange benchmarks. Despite similar probes by the enforcer’s peers around the world, the South African investigation has not exactly gone to plan, having bogged down in a procedural quagmire. Given the matter’s scale and profile, the commission needs to ensure the case does not fall apart.

A convoy of claims

It’s difficult to think of many messier European competition litigation stories than the claims for damages brought against Visa and Mastercard in the UK.

In 2018, the European Commission may not take concrete decisions about online platforms, but expect it to figure out its position.

The 34-year-old vertical merger guidelines may not be revised in 2018, but antitrust observers expect that the outcome of the Department of Justice’s challenge to AT&T’s acquisition of Time Warner – along with modern economic analysis – will be included in any future update.

The Australian Competition and Consumer Commission’s current crackdown on the financial services sector will no doubt unveil anticompetitive activity in the market, localantitrust observers say. However, they disagree about how soon this deepened probe will manifest as enforcement actions.

Will the UK play monopoly politics?

Antitrust is ruffling political feathers in the US. Yet across the Atlantic, it receives scant public attention.

In her efforts to win a congressional seat in 2018, Lillian Salerno rarely mentions the terms “barrier to entry”, “antitrust” or “competition law” to voters in the suburbs of northeastern Dallas.

US DOJ honours Rill with fellowship

The US Department of Justice has created a new programme to encourage the career development of young lawyers in the Antitrust Division, naming it after former assistant attorney general James F Rill.

Two kinds of people reacted to the Federal Communications Commission’s vote to implement the Restoring Internet Freedom proposal. One kind claimed that the decision was highly irresponsible and would harm consumers significantly. The other kind accused the first group of overreacting to what was simply a return to the pre-2015 status quo.

At the inaugural Women in Antitrust conference in Washington, DC, last November, panellists debated competition authorities’ efforts to foster innovation, in some cases – such as the European Commission’s analysis of the Dow/DuPont deal – going back to the very facilities for research and development. Conference co-chair Kristina Nordlander, a partner at Sidley Austin in Brussels and London, moderated the discussion

An interview with Kim Sang-jo

Kim Sang-jo was appointed chairman of Korea’s Fair Trade Commission in May 2017, just a week after President Moon Jae-in took office following the impeachment of his predecessor in a bribery scandal involving Samsung – which also touched the KFTC. Kim spoke with Tom Webb in October 2017 about his plans for the agency at a challenging time

A tale of two standards

The debate about whether antitrust enforcement should rely on a strict consumer welfarestandard or incorporate public interest considerations is not new, but it was reignited in political prominence with the Democratic Party’s summer 2017 call for an overhaul of antitrust enforcement in the US. Complemented by conference panels on the topic from Brussels to Brasília and a Senate hearing to boot, the conversation is back in the spotlight.

For the past several years, conferences, speeches and scholarship have made much of big data – the large, diverse and often anonymised sets of information that can be analysed to reveal trends and patterns. But at the on-the-ground level of active antitrust disputes, the question of access to more old-fashioned kinds of data remains an area of competition law and policy that awaits further resolution by courts and governments.

After years of critics clamouring for changes to the way the US antitrust agencies enforce the law, lawmakers in 2017 proposed legislation that they believe would boost competition enforcement. But longtime antitrust observers on the right and the left say those amendments aren’t necessary. What’s needed, they say, is the bravery to bring difficult cases. Ron Knox explores whether Trump administration officials are up to the challenge