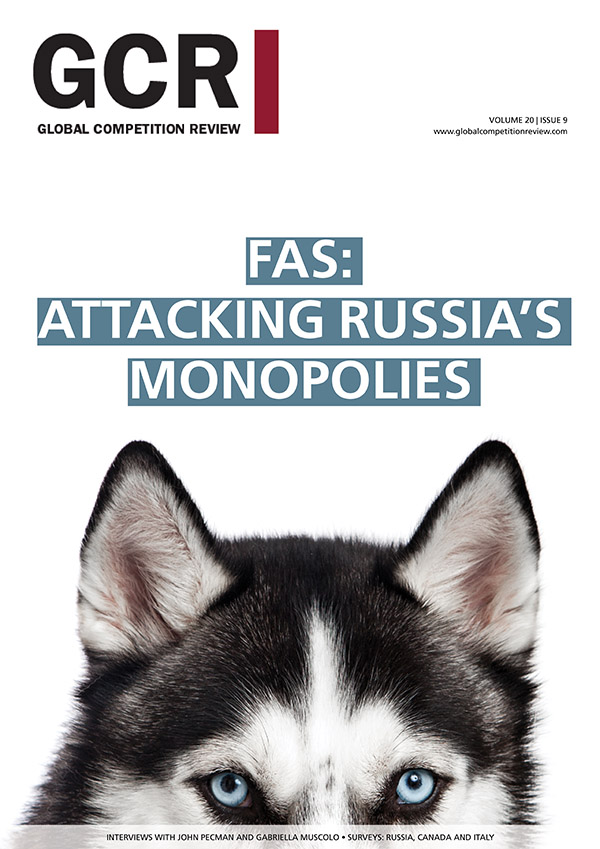 As Russia’s Federal Antimonopoly Service has picked up its activity in recent years, the country’s excellent antitrust lawyers have followed right along. Charles McConnell weighs a solid mix of local law firms and major international law firms with Russian branches

An interview with Igor Artemiev

Igor Artemiev has headed Russia’s Federal Antimonopoly Service since its establishment in 2004, and is deservedly proud of its progress. He spoke with Charles McConnell about the competition authority’s work attacking monopolies and collusive actors as it stands guard over the liberalisation of the Russian economy – a role that Artemiev says can make him unpopular with other government officials as well as with certain businesses.

An interview with John Pecman

The tenure of Canada’s acclaimed Commissioner of Competition John Pecman is set to expire in June 2018. Sonya Lalli spoke to him in September about how the Competition Bureau has fared under his leadership, challenges that persist and what could lie ahead.

An interview with Gabriella Muscolo

Italy has increased competition enforcement markedly since the chaos of the 2008 financial crisis. Gabriella Muscolo, a commissioner of Italy’s Competition Authority, spoke with Janith Aranze about the agency’s increased enforcement, its big data inquiry, the state of the art related to leniency programmes and procedural fairness

Italy remains a competition hotspot in Europe, with an intriguing blend of huge international firms going up against prestigious national practices, and new firms emerging to challenge the status quo. Janith Aranze reports on a flagship competition bar.