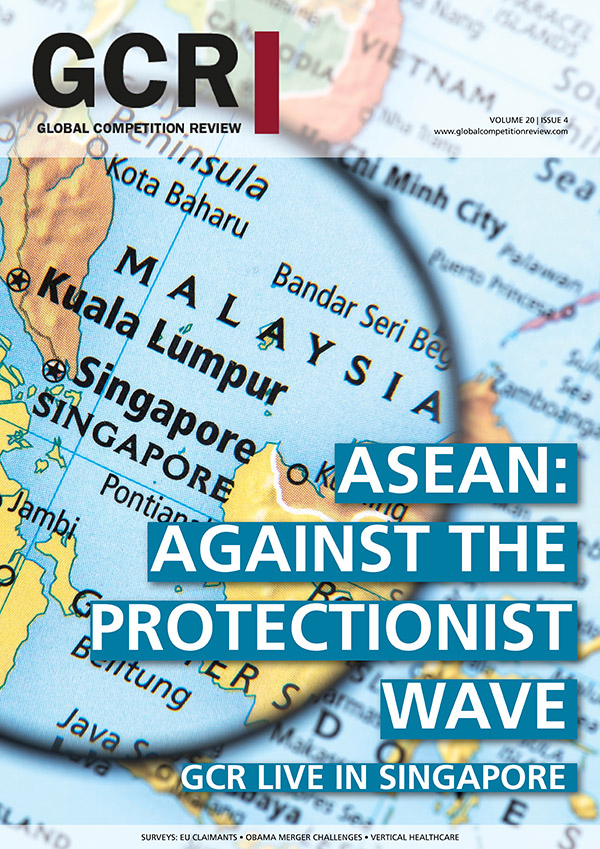 Over his years in China’s National Development and Reform Commission, Zhang Handong has seen how the country’s embrace of market competition has dovetailed with national industrial policy. In a keynote address to GCR Live Singapore: 6th Annual Asia-Pacific Law Leaders Forum, Zhang, who heads the NDRC’s price supervision and anti-monopoly bureau, explained how that relationship has evolved, and how the country’s antitrust enforcement regime has worked to ensure government policy avoids distorting competition

At the 2017 GCR Live Asia Law Leaders conference in Singapore, enforcers from some of the Association of Southeast Asian Nations’ most crucial jurisdictions gathered to discuss the progress of ASEAN and the future of trade, both in the region and globally. Here, we reproduce a part of that conversation, focusing on the growth of competition law in Asia, and the region’s reaction to the rise of nationalism in the West

When Barack Obama faced re-election in 2012, the media questioned whether he had kept his campaign promise to reinvigorate enforcement against anticompetitive deals. In his second term, the US antitrust agencies fulfilled that commitment with two dozen challenges in court. David Gelfand and Grant Bermann explain

The hurdles to horizontal consolidation in US healthcare – hospitals buying hospitals, insurers buying insurers – have become clear over the course of several antitrust agency enforcement actions in the past decade. The possibilities for vertical healthcare mergers, however, appear less bounded. Pallavi Guniganti reports

An interview with Pablo Trevisan

Pablo Trevisan, a commissioner at Argentina’s National Commission for the Defence of Competition (CNDC), spoke with Charles McConnell in March about some of the agency’s major developments, goals and struggles in the run-up to elections. Priority one: get the new competition bill through Congress as soon as possible.

As European Union member states continue to implement the damages directive after the official deadline, some law firms stand out above the rest in their pursuit of pay-offs. Malina McLennan reports on some of the more prominent firms focusing on damages claims across the continent.

An interview with Eddy de Smijter

After a successful career in academia, Eddy de Smijter forayed into policymaking as a major contributor to the unit at the European Commission charged with drafting and implementing the damages directive. Malina McLennan spoke with De Smijter about the directive’s development and effect on private damages litigation today

The time may finally be right to amend Indonesia’s 18-year-old antitrust law, but shifts in the competition authority’s membership and a national election have set difficult and rapidly approaching deadlines to make those changes happen.

China is carefully weighing how to approach potential competition issues in big data and online platform services in which the primary product is ostensibly free for consumers, a senior official at the Ministry of Commerce said today.

US will suffer in any trade war, ASEAN enforcers warn

While the US and some European countries seem to be shunning free trade agreements, senior competition officials from multiple Asian countries say they will continue to push for global trade regardless of their western counterparts.